Scott Armato has recently joined the Triad team, working primarily in grant writing, but always willing to lend a hand wherever his talents are needed.

Scott comes to us after five years in the marketing department at Cape May Brewing Company where he wrote press releases, blogs, and a number of successful tourism marketing grants. 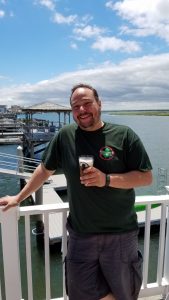 Prior to that, Scott spent some time as a professional musician, playing the organ at a number of local churches and directing several musicals throughout the area. Faithful theatergoers may recognize Scott from such varied roles as Horton the Elephant in Seussical and the title role in Sweeney Todd: The Demon Barber of Fleet Street.

While Scott has since given up his musical endeavors, he still enjoys seeing live music. He’s looking forward to his post-pandemic return to such venues as the Fillmore Philly, Ardmore Music Hall, and his favorite spot on the planet – the Mann Music Center – having been lucky enough to perform there with the Philadelphia Orchestra when attending Villanova University.

In addition, Scott loves a good meal, knows every line to the movie Clue, and will happily bond with anyone over a chessboard